The article below is reproduced on  Wikipedia. For a fuller account of the early years of Abbeygreen, download “The History of Abbeygreen 1843-1933” by J.L. carvel.

Abbeygreen Church is a reformed, evangelical church in the town of Lesmahagow, South Lanarkshire. It lies opposite the Glebe Park on Abbeygreen. 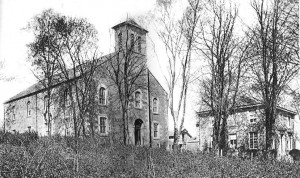 The ministry of Dr Parker continued until 1855. On 16 May 1856 a probationer minister, the Rev. James Laing, was ordained and inducted. Mr Laing continued as the minster in Abbeygreen until 25 February 1872. His successor, the Rev. James Arthur Gray was ordained on 22 November 1872. Abbeygreen became a branch of the United Free Church of Scotland at the joining of the Free Church and the United Presbyterian Church in 1900. Mr Gray continued as the minister until his retiral in 1927. On 27 October 1927, the Rev. John Walker MA was ordained as minister of Abbeygreen. At the start of his ministry, in 1929, the United Presbyterian Church reunited with the Church of Scotland. The Church of Scotland having been reconstituted to honour the principles of the Disruption, through the abolishment of patronage, in 1874, and by further Acts of Parliament in 1921 and 1925. Mr Walker’s ministry ended in May 1939. 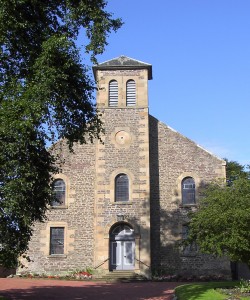 Mr Walker was followed by the Rev. T.F. Neill. Mr Neill was ordained on 25 January 1940. Late in 1940, Mr Morton, the minister of the neighbouring Cordiner Church became seriously ill. The Cordiner Church was founded as the Lesmahagow Relief Church in 1837 and took its name from its second minister, the Rev. Robert Cordiner, who served it from 1846 until 1897. Abbeygreen and the Cordiner Church had long enjoyed a mutually supportive relationship and so the members of the Cordiner church were invited to temporarily join with Abbeygreen in worship. In June 1941 members of the Cordiner met with the congregation of Abbeygreen to discuss union of the two churches and in July 1941, the two churches united. The sessions united and a congregational board was formed, with the last meeting of the old Deacons Court of Abbeygreen taking place on the first of July 1941. This action represents the creation of the present day constitution of Abbeygreen, Church of Scotland, being led through elected members of the Congregational Board and ordained elders forming the Kirk Session. Mr Neill served the church intil 1953 when he was called to Cranhill in Glasgow. On 6 April 1954, the Rev. Robert B.W. Walker MB, ChB was inducted as minister of Abbeygreen. Dr Walker continued in the ministry until ill health forced him to demit his charge at the end of October 1981. Following a long vacancy, a probationer minister, the Rev. David S. Carmichael, was ordained and inducted on 2 September 1982, and has since continued to faithfully serve the Lord and His people.